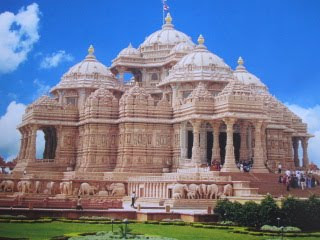 We have arrived in Delhi and are staying at the ISKCON guesthouse. The Air India flight was not a propellar machine but a small jet plane which brought us to Delhi in just over 2 hours. They served some nice food too.

We took a local taxi from the airport to the ISKCON temple. It was rush hour and the journey took a very long time. Delhi is booming economically and there is no sign of a recession here, however, it can not cope with its overwhelming traffic and pollution. Most of the time the traffic stood still and even a major traffic jam on London's M25 seemed like paradise in comparison.

I feel much for the people of India as they enter sleep walking into the global Coca Cola culture, which promises them happiness through economic development. Little do they know about the side effects of it. The big multi national companies are everywhere. Oil seems to be cheap and concret and steel seems easily available. Anti pollution is unheard of. Delhi must be one of the most polluted cities on the globe. Many people have scarves rapped over their mouth and nose.

Having been in Delhi 3 years ago it seems the traffic is doubling every year. The city seems to burst in its seams without any solution in sight. All traffic is on the road as there is no underground transport system.

In the south of Delhi is Faridabad, the industrial heart of the city. One can see steel and concrete everywhere as a huge flyover is being constructed to relief the exploding traffic. India's middle class is blooming and housing estates are springing up everywhere, most of it high rise tower blocks. No wonder that India is one of the world's greatest polluters but people want economic development more than anything else. One advertisement read so typically, 'we are selling dreams'. This dreams of a better life will soon turn out to be a nightmare and India's people are sleep walking right into it. Spiritual values and India's great spiritual heritage seem to disappear quickly, becoming nothing more than hollow imagery and empty rituals. It is painful to see this ignorance.

Next day we went to Akshardham, a Swami Narayana temple on the outskirts of Delhi. It is a huge multi million dollar complex of finely carved marble with perfectly ornamented gardens, a true masterpiece of Vedic architecture. It is a spiritual Disneyland and museum, albeit without any real spiritual life or the chanting of the names of God. It is an educational heritage of Vedic culture but unfortunately spiritually dead.

One can see many Vedic scenes from ancient times singing the glories of India's great past, an underground boat ride with dioramas right and left, an incredibly well done film on a huge screen about the life of Neelkanth, the child yogi, who was later known as Swaminarayan.

The film was shot in 108 locations in India and features a cast of 45,000 people. It is certainly worth watching. Akshardham is a 100-acre cultural complex. It showcases India's glorious traditions of art, architecture, wisdom and spirituality. It took 300 million man-hours to carve 300,000 stones and create the entire complex. One can see 20,000 superbly sculpted figures and an over 2 km long double-storeyed parikrama path. Modern technology is an intrinsic part of the whole experience. The cultural garden has 22-acres of lush lawns and trees with 900,000 saplings and shrubs of 250 varieties. It would have taken 50 years to build such a complex, however, it was completed in just 5 years by mainly volunteers.

The highlight of our 5 hour visit was a gigantic musical water display with many moving and rotating fountains and colourful lighting, all computer synchronized to Indian classical music. It puts any firework display to shame. It is certainly worth a visit.