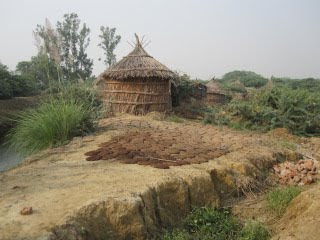 Today's parikrama took us to Nandagram, which is Nanda Maharaja's palace and the place where Krishna performed His childhood pastimes. Varshana Kishori mataji did not feel too well this morning. Therefore only Samir, Nandini and myself went on this parikrama.

On the way to Nandagram we stopped at Nanda Baba's sitting place, which is not far from Nandagram. There he sat every afternoon waiting for Krishna's return from the pastures. The sign that Krishna was returning along with his cowherd friends and the cows was a huge dust cloud which was raised hight into the sky by the hooves of the cows. Once Nanda Baba saw this cloud. he became overjoyed that his dear Lala was returning.

Walking through the countryside of Braj is an amazing experience. One can see everywhere little huts with straw walls and roofs for storing feed for the cows and small houses with walls made of cow dung for storing dried cow paddy for fire fuel. The walls of those houses have even scratched in ornamented designs on it.

Cow paddy is made by mixing cow dung with straw and then drying it in the sun. It gives off much heat, burns lowly and is used for cooking, making chapatis etc. I have been told that chapatis rosted on cowdung fire have a most delicious flavour to it. I hope that I will be able to experience this myself one day. Moreover, it is an environmentally friendly cooking method.

At Nanda Maharaja's palace in Nandagram one can see the deities of Nanda and Yashoda and in between them Krishna and Balarama, who are both black and dressed in exactly the same way. Normally we would expect Krishna to have a blackish complexion and Balarama a whitish one. There are several explanations, which Dina Bandhu, our parikrama guide, kindly told us about.

Balarama is the older brother who was born just 8 days before Krishna. He feels therefore very protective and to confuse the demons who are sent by Kamsa to kill Krishna he smeared a mixture of ghee and ashes all over His body. The identical dress can also be explained as follows.

Every mother knows that little children are always fighting if they are dressed differently, especially children of the same or similar age. Mother Yashoda is a very clever mother who knows this and therefore dresses Krishna and Balarama in identical outfits. Having recently seen some of my own childhood photos I have to say that my mother was also clever and practical in this way.

On our return from Nandagram we visited nearby Pavan Sarovar, where we took a refreshing bath. You can read a detailed account of this holy site on our Kartik Diary 2006. You will have to scroll to the diary entry number 4, which is almost at the bottom of the page. There is therefore no need to repeat it here again.

Our last stop of the day was at Vrindakunda, where we also had a delicious lunch prasadam. At Vrindakunda Dina Bandhu Prabhu told us many pastime stories, which took place there or at Nandagram. 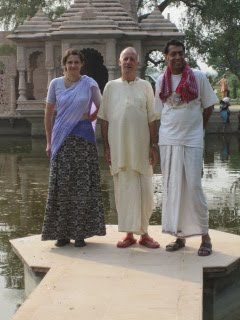 One day Durvasa Muni passed through Vraja. Because the muni had a very hot temper the gopis quickly run away. However, Srimati Radhika, who was just a young girl at the time, did not run away and asked the muni to sit down while she cooked some prasadam for him. She made a stove out of clay as well as clay plates and cups. Now she also made laddus and all kind of other eatables out of clay.

Understandably Durvasa Muni refused to taste these preparations made of mud but Radharani suddenly pushed a clay laddu into the muni's mouth. To his great surprise the taste of that laddu was more delicious than anything he ever ate before. He therefore gave her immediately a benediction from his heart that whoever ate her cooking would live long and would never fall ill. From that day on mother Yashoda obliged Radharani to cook for her Krishna.