A visit to the Gurukula 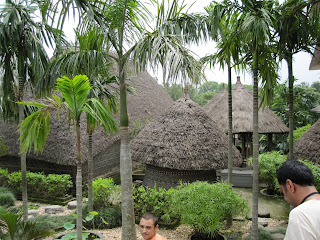 Today is our second full day in Mayapur. All of us have settled in nicely. The best part of the day is mangal arati at 4:30 AM when so many wonderful Vaishnavas assemble and chant Hare Krishna. Sri Sri Radha Madhava looked so gorgeous today in Their night outfit. Japa time was also very wonderful. Devotees sit in groups around tulasi devi (sacred plant) and chant Hare Krishna. I managed to chant 12 rounds during this japa period.

Just before 7 AM the maha prasadam stall in the courtyard opens. There one can buy all sorts of delicious sweets and even pizza. These items are directly offered to Their Lordships, which makes them spiritually very potent. It confirms to us how nice and blissful spiritual life actually is. I could not resist buying one of our newly discovered sweet, a round ball with sesame on the outside and custard filling inside. It is so sweet and delicious, that it becomes irresistible. Here in Mayapur we don't count the calories nor cholesterol. That we will do when we are back.

After the morning programme we had some light prasadam at Govinda's, namely masala dosa pancakes with potatoe filling, dhal and coconut chutney. It seemed a very small portion but it filled us up eventually. One can not eat very much in such a hot climate and if one does, one becomes ill immediately. We also had freshly pressed apple and orange juice, which was delicious and refreshing. It doesn't compare with juice from the super market.

Our tickets to Jagannatha Puri with the over night train are still in question. We want to book an AC sleeper ticket, which means air conditioned apartments with four foldable beds. The compartments are divided by curtains. This would ensure that we are amongst ourselves. The air condition consists usually of some vents in the wall which blow out a stream of cold air, so cold and drafty that one easily gets ill after a nights journey. Last time I traveled this way I blocked the vents with some cloth to make it somewhat bearable. I actually had a light cold for the last two days, which mainly meant a running nose. It is hard to believe that one can catch a cold in such a hot country such as India. It is mainly due to drafts, fans and air condition.

We have also booked our accommodation in Puri, namely the Birla Guesthouse. We are lucky that Samir as well as Varshana Kishori speak Hindi, which really helped with the booking arrangement. The guesthouse is right next to the beach of the Indian Ocean. In Puri the ocean is considered a holy place of pilgrimage because Lord Caitanya bathed there. He also washed the body of Haridas Thakur there after his disappearance. Haridas Thakur is one of the greatest Vaishnavas, who is teaching us by his example how to chant Hare Krishna.

We just returned from a visit to the Mayapur Gurukula, a Vedic school for children. It is away from the main temple complex and is thus sheltered from the steady stream of pilgrims. We have seen boys of all ages who live and study here according to the motto 'simple living and high thinking'. Entering the complex one feels transported to a different age. One meets simple bamboo structures which support deep overhanging straw roofs. The cooking is done on clay stoves, which are fired with dried cow dung paddies. The water supply is provided by hand pumps. There is also a small temple room with a range of deities and saligram silas, which the boys worship daily. The temple room also houses a large library. The gurukula is built on high ground because of the annual flood by mother Ganga. Besides being expert musicians, especially on the mridanga drum, the boys also learn martial arts and many other subjects. All in all they grow up in a spiritual atmosphere sheltered from the influence of materialistic civilization.
Posted by Gauranga at 04:11