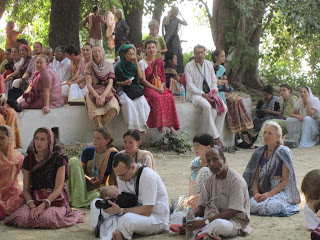 Today is Diwali, the day Lord Krishna's damodara lila took place some 5,000 years ago. Generally people remember Lord Ramachandra's return to Ayodya on this day but the Brajabasis (inhabitants of Braj, the land in which Lord Krishna performed His pastimes) care little about Lord Rama. For them only Krishna matters or better Radharani. The people of Braj therefore celebrate Krishna's damodara lila on Diwali day.

Our parikrama took us therefore to Gokula, the actual place of this pastime. Gokula is on the other side of the Yamuna river, a place so peaceful and serene one can hardly imagine in todays busy world. The place in Gokula where we sat down is called Chinta Haran Ghat. Chinta means worries and haran means take away. It is therefore the place where all ones worries are taken away. Indeed we felt exactly like this.

Mother Yashoda was very much worried about Krishna's butter stealing. She therefore thought that perhaps the servant girls did not know how to prepare butter nicely for her Lala. She thought let me prepare the butter myself and she gave all the servants a day off.

This was Diwali day. She brought milk from the best of cows, Padmaghanda. Padma means fragrance and the milk of this particular cow was so sweet and fragrant. Of course, we can hardly imagine anything like this today as the milk from many cows from even different countries is all mixed up.

Nanda Maharaja is the king of cowherds and he has 9 lakhs of cows. 1 lakh is 100,000. He has therefore 900,000 cows. Now the milk of the 1,000 best cows is fed to the 100 best cows and their milk to the 10 best and their milk to Padmaghanda. We can hardly imagine how sweet and fragrant this milk must have been.

It may sound strange indeed that Krishna eats butter, because the butter in our supermarkets is not something we would eat without bread for instance. However, we must understand that all milk was boiled after milking and then cooled down and turned into yogurt. It certainly makes sense in a hot climate such as India.

This yogurt then is churned into butter. It is said that butter made from cream has bad cholesterol and butter made from yogurt has good cholesterol. I have been told that such butter has also an extraordinary taste, smell and consistence and one can eat indeed great quantities of it with delight especially if it is sweetened as well. 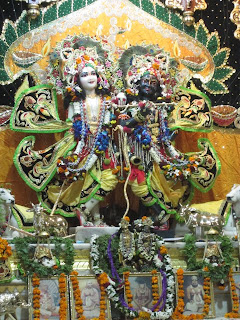 On that Diwali day mother Yashoda put Krishna to sleep because as all mothers know it is very difficult to get the housework done if children are awake. Now she started to churn the yogurt into butter. This was done with a churning stick in a clay pot. The stick was held with a rope against the wall while another rope was several times looped around the stick which then with pulling movements right and left put the churning rod into motion.

The churning made a sound just like a mridanga drum and Mother Yashoda's bangles sounded just like karatals. While churning butter Mother Yashoda sang Krishna's names. This woke up Lala, who pulled His mother by her sari to get her attention. She took Krishna immediately into her arms and breastfed Him.

Suddenly, she could smell the over boiling milk on the stove in the kitchen. She put Lala down and run into the kitchen. This made Krishna very angry. He picked up a stone and smashed the butter pot. Then He climbed on the grinding mortar and untied butter pots, which were hanging from the ceiling, ate some of the butter and distributed the rest to the monkeys. He thought that they helped Him in His incarnation as Lord Ramachandra, but He did not reward them accordingly.

When Mother Yashoda returned she saw the broken pots and little buttery footprints everywhere. She picked up a stick and approached Krishna from behind. When the monkeys saw the stick they immediately run away and Lala could understand that His mother was standing right behind Him. Out of fear He immediately run away and Mother Yashoda chased behind Him. Eventually she dropped the stick and Krishna, seen that she was exhausted, let her capture Him.

The older gopis began to laugh and said: " This morning you easily tied a little black rope around Lala's belly and now you can not tie a rope even after using all the rope in the house." Eventually Krishna allowed her to bind Him. This pastime has many more details, but it would be too much to write it all down.
Posted by Gauranga at 03:41