The Dust of Braj

Krishna is the Lover of Radha 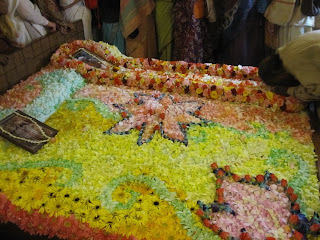 The temple had been wonderfully decorated with elaborate flower arrangements everywhere. For the morning arati a tape of Srila Prabhupada singing 'vibhavari sesa' had been arranged. The atmosphere was so thick and heavy that one could have literally cut it. There were so many devotees present, it was like an endless stream and the temple room was packed to the maximum. I was surprised how many people fitted in. Devotees came from everywhere and it felt like this was the highlight of the entire kartik festival. 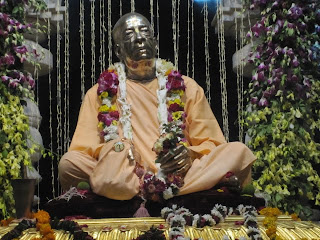 Devotees fasted till midday and at 2 PM there was a feast in honor of Srila Prabhupada. As evening approached devotees flocked into Srila Prabhupada's quarters, the same rooms where he spent his final days and from where he departed. I managed to get a place at the altar during the evening arati and then made my way towards Srila Prabhupada's room.

Thereafter senior devotees shared anecdotes of and experiences with Srila Prabhupada. This was the real nectar and the programme went on till late at night. I would like to relate one story which I heard from Dina Bandhu Prabhu and which I find remarkable, especially as it is the only account of this sort we have.

One evening Srila Prabhupada called Bhavananda into his room and said the following: "When I was in the spiritual sky Krishna told me to go to the material world and write those books but I replied that it is a horrible place to go to. Krishna again said that I must go and write those books and again I said that it is a horrible place! How will I maintain myself there? Krishna replied that He will personally look after me. Just see today I have everything, so many temples all around the world, so many devotees etc."

I never heard of this account before but I did hear that Srila Prabhupada said that these books were directly dictated to him by Krishna. On the other hand we heard last night form Abhirama Prabhu that at one point Srila Prabhupada strongly said "if you make me into God I will turn my back an all of you and go back to India." 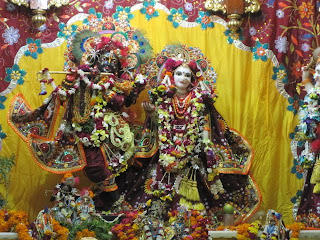 There is a wonderful set of DVDs available called 'Memories of Srila Prabhupada', which we have at the Centre and on which senior disciples relate their experiences with Srila Prabhupada. It contains so much nectar. Personally I have only scratched the surface of it so far and only watched perhaps 3 out of 19 DVDs. I will certainly watch the rest of it on our return and will also make it available to everyone else interested.

Dina Bandhu Prabhu, our parikrama guide and dear friend, was unfortunately not well over the past two days. Therefore the parikrama to Yavat, Ter Kadamba and Vrindakunda had to be canceled. I met Dina Bandhu today at the temple and he said that he feels again being under the 'living'. Please pray for his full and speedy recovery.

Varshana Kishori Mataji has in the meantime gone to Mumbai to be with her brother for the remainder of our time in India. She will join us again in Dubai, from where we will travel all together with Emirates Airlines back to the UK. We are painfully aware that our time in Vrindavan is running out fast, however, we look forward to meeting all devotees in Leicester to share much nectar and inspiration with all of you on our return. Next Saturday's programme, which is the 31st of October, will therefore be at the Centre again. We hope that all of you will be able to attend.