We have arrived in Vrindavan

The Lifting of Govardhana Hill 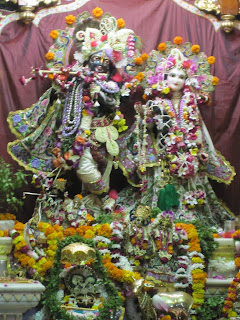 Finally the goal of our journey has been achieved, we have arrived in the holy dham of Vrindavan. We reached our guest house after some difficulties. Economic development does not stop in Vrindavan. Developers have firmly moved into the city. It is a good investment opportunity as property prices are spiralling out of control. What was once a forest and later a village has become a city, however, with much underdeveloped infrastructure and sewage systems. It is another example of uncontrolled economic development.

There are some small changes at Krishna Balarama Mandir too. Security has been stepped up and one needs now a gate and camera pass. The altar and some of the temple's inside has also been re-painted, however, Radhe Syam, Krishna Balarama and Gaura Nitai look as splendid as ever. Standing in front of Radhe Syam's altar feels like being back home. I am surprised by the little difference between my meditation on the divine couple and being actually in front of Them and I am reminded that Vrindavan is a state of consciousness.

I wonder if Radharani still remembers me when I take my usual place right in front of and slightly to the left of the altar. I hardly stand there gazing at Srimati Radhika's ever enchanting lotus face when the pujari throws a flower garland over my head. How could I have doubted as tears roll down my cheeks. The queen of Vrindavan has welcomed me as I am standing there speechless and in utter astonishment.

I don't want to leave this best of all places in the entire universe, the spot I have become so accustomed to in my meditation and I have to be dragged away by the others for prasadam at the MVT restaurant.

The evening arati and the damodara prayers are like an ocean of spiritual bliss. Devotees from all over the world have assembled here in Vrindavan to celebrate this best of all months, namely kartik. Any devotional service performed in Vrindavan counts a 100 times and in this month of kartik an additional 1000 times. I feel very fortunate of having been allowed to be here.

It is a wonderful sight to see devotees offering lamps to Their Lords, much like an ocean of lights moving past the altars. It is inspiring to see all this devotion in the faces of so many Vaishnavas from all around the world.

Today is Bahulastami and the appearance of Radha Kunda. Radha Kunda is considered the most sacred body of water in the entire universe, being the liquid form of Srimati Radharani's prema or love for Sri Krishna. It is described by Rupa Goswami in his Nectar of Instructions that bathing in her waters will definitely awaken ones love of Godhead.

There is a midnight bathing in Radha Kunda and a harinam chanting procession around its shore. However, I am down with the flue staying back and in bed. Writing this I actually feel already better and with some medicine I will be back on track by tomorrow or the day after I hope.

The others in our party have gone for the midnight bathing and I pray they will have a wonderful experience. I don't feel too bad as I have been bathing in the sacred waters at least twice before.

In the afternoon we went shopping in Loy Bazar to get some new outfits for our beloved deities back home in Leicester, Sri Sri Nitai Saci-Sundar. I pray They will be pleased with our humble endeavours. Praying for the welfare of all of you I beg to remain your servant in the service of Sri Sri Radha Syamasundar and Srila Prabhupada.
Posted by Gauranga at 08:23