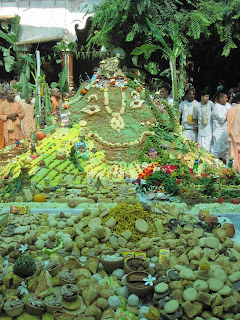 Today is Govardhana Puja. The morning arati was very wonderful, even though I was tired. Mid-morning we went with the deities of Krishna and Balarama to the nearby goshalla where devotees keep around 400 cows. There we had go puja, which is worship and feeding of the cows. One could buy laddu sweets made with gour, which is molasses from the early stages of sugar making. It is a great sweetener and is much healthier than white, bleached sugar. I am using it in my cooking all the time and the cows love it too.

After breakfast prasadam in the goshalla we returned to the temple where devotees had prepared a gigantic Govardhana Hill made from cooked rice as a base and covered with sweet halavah. The hill was decorated with all sorts of cookies and sweets, had honey lakes and kundas, toy cows and other animals such as peacocks on it. Some steps and stairs led to hidden caves. It was a true replica of Govardhana Hill as described in various scriptures such as Srimad Bhagavatam. 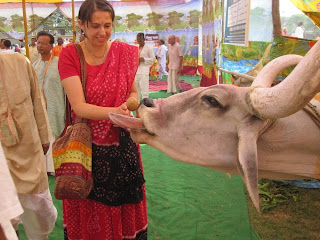 After the abhisheka bathing ceremony of the temple govardhana silas (rocks from Govardhana Hill) they were placed on top and the side of the hill and the arati ceremony and worship of Govardhana Hill began. All this was accompanied by the sweetest kirtan from Aindra Prabhu and his 24 hour kirtan band. Thousands of devotees flooded the temple and it was hard to move around. It was a most joyful atmosphere. Govardhana Puja is such a blissful festival, perhaps the most ecstatic festival in the entire Vaishnava year.

Now it was time to circumambulate Govardhana Hill. Devotees moved or danced clockwise around the hill chanting loudly the Lord's holy names in full ecstasy. This went on for quite a while and I recorded some wonderful video footage of it, which I will upload to this blog and to our Facebook profile (Gauranga Sundara Das, Leicester) on our return. Now the hill was dismantled and the prasadam was distributed to the eagerly waiting devotees. The festivities went on till early afternoon and concluded with a grand prasadam feast for all.

Tomorrow we will go on Govardhana parikrama. We will circumambulate the original Govardhana Hill, which has a parikrama path of 22 km. It will certainly not be a s easy as circumambulate the hill in the temple room today. Many devotees do it by walking barefoot. I just spoke to one mataji who did it in four and a half hours. I will certainly not be able to do it entirely without shoes and for sure not in such a record time. Please give us your blessings and well-wishes that we can accomplish this great parikrama.