How Giriraja came to Bless us with His Presence 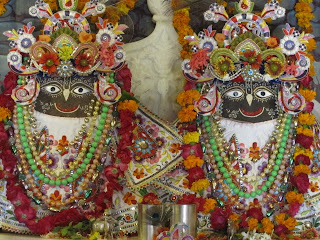 The day before yesterday we did Govardhana parikrama, the circumambulation of Govardhana Hill. It is a 22 km stretch, which took us some 11 hours to complete, including breakfast, lunch and many stops at various places of spiritual significance.

I have done this parikrama several times before. All in all this was the easiest walk out of all of them perhaps thanks to my well cushioned flip flop sandals and the rather overcast sky. Many devotees went barefoot for the whole parikrama and some went barefoot for part of it. All together we had 6 buses with devotees from Russia, Spain, South America and many other countries around the globe, a truly international pilgrimage.

The starting point of our parikrama was Kusum Sarovar, a wonderful palace and bathing ghat right next to Govardhana Hill. Kusum means flowers and sarovar means lake. It is a famous place of Lord Krishna's pastimes some 5,000 years ago. Radharani and the gopis used to come here to pick flowers for their pastimes at Radha Kunda. 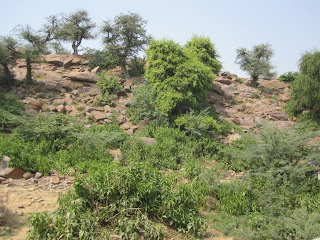 Near Kusum Sarovar is Manasi Ganga. Here Krishna's famous boat pastime used to take place. You can read more about it on our Kartik Diary 3 (Around Govardhana Hill). No parikrama is complete without visiting the temple of Haridev, which is close to Manasi Ganga. Lord Caitanya also started his Govarham parikrama 500 years ago by bathing in Manasi Ganga and taking darshan of Haridev. Therefore all Vaishnavas follow in His footsteps still today.

At Manasi Ganga Deena Bandhu Prabhu told us the pastime of the origine of Manasi Ganga. After Krishna killed the demon Vatsasura, who had appeared in the shape of a calf, His cowherd friends told Him that He had incurred sin and that they would not play with Him anymore until He had atoned for it by bathing in the Ganges. Krishna replied that the Ganges was far away. Then by meditation He brought Ganga to that place. Therefore it is called Manasi Ganga, because manasi means mind. Previosly Manasi Ganga was a river, but today one can only see a large lake. It is said that bathing in Manasi Ganga is thousand times more purifying than bathing in the Ganges. 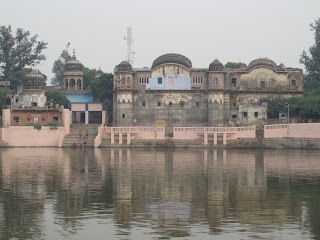 Our next big stop was Govinda Kunda. This is the actual place where Lord Indra apologised for sending torrents of rain on the brajabasis and cows, because Krishna had stopped the Indra yajna. It is also the place where Airavata, Lord Indra's elephant carrier, gave Krishna an abhisheka bath, the waters of which formed the present Govinda Kunda.

When Lord Indra arrived on Airavata all the cows were frightened by this huge elephant with many trunks and ran away, forcing the cowherd boys to run after them. Only Madhumangala, who was lame could not run away, but hid behind a bush. After Indra and the other demigods had left, Nanda Maharaja and the cowherd men appeared on the scene and found the most exquisite arati paraphernalia such as golden trays inlaid with all sorts of precious stones, chamaras, peacock fans, lamps etc. They questioned the cowherd boys where this paraphernalia came from but they could only reply that they ran away after seeing this gigantic elephant. Madhumangala was the only one who had seen everything.

He explained that he saw a huge elephant with many trunks and a man with eyes all over his body with a beautiful crown on his head bowing down before Krishna. He also saw a man with four heads and many other men, all offering prayers to Krishna. Then this big elephant started to pour water over Krishna and all of them did arati to Him. There were also beautiful women dancing and singing and after that they all left leaving the arati paraphernalia behind. 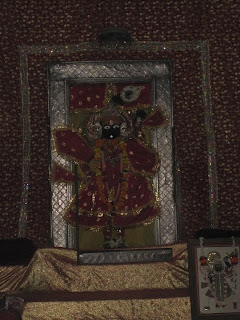 Our next spot was at Punchari Ka Lautha Baba's Temple. This temple is dedicated to Lautha, a cowherd friend of Krishna, who sat and waited for Krishna to return to Vrindavana after He had gone to Mathura. The deity in this temple is therefore in a sitting position. Because this temple is close to Punchari he is also known as Punchari Ka Lautha. The deity of Lautha is red, has a mustache and is sitting. It is covered by layers of vermilion, which is regularly put on him. This deity is one of the most famous deities throughout Braj.

When Akrura was taking Krishna away to Mathura, Lautha asked Krishna when He would return. Krishna told him he would return the day after tomorrow. Lautha said he would not eat or drink anything until He returned. Therefore the deity is offered only water but not any solid food. Lautha then came to this place and sat down. He is still waiting for Krishna's to return after 5,000 years.

We visited many other important places, but it would exceed the format of this blog to describe them all. After we had accomplished half of the parikrama the sun became very hot. Fortunately, some of the parikrama path was in the shadow of some beautiful trees and I realised what a great service a tree can give and what the word 'shelter' really means.

Finally, we reached Uddhava Kunda. There we heard the story of the pujari (priest), who's father completed 5,000 Govardhana parikramas to get a son. It took him 15 years to complete his vow, after which he got a son. It is said that all ones tiredness from Govardhana Parikrama disappears when one takes bath in Uddhava Kunda. We did not get the chance of finding out as our group moved on towards Radha Kunda. 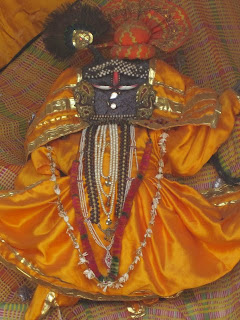 After circumablulating Radha Kunda we headed back towards Kusum Sarovar, the starting point of our parikrama. There we had delicious lunch prasadam. By now it was 6 PM and the heat of the day had long disappeared. A few devotees had to keep the monkeys at bay, who were eager to snatch some of our chapatis. Somehow or other one brave monkey still managed to snatch a chapati from the distribution bucket. The monkeys in Vrindavan are very bold and mischievous.

Tomorrow Varshana Kishori Mataji is leaving our group to visit her relatives in Mumbai. I asked everyone what was their greatest austerity so far. Varshana Kishori said that Govardhana parikrama was the toughest part for her. Nandini Radha felt her greatest austerity was being ill and Samir said he did not do many austerities because he has been ill for the past so many days. I felt that shopping was my greatest austerity, which I take as a sign of some slight spiritual advancement, remembering the time when I first visited Vrindavan some 31 years ago and when I spent most of my time shopping, only to realize the day before our departure how quickly my precious time in Vrindavan had slipped away. I sat in Radha Raman temple and cried bitterly.