A camel ride to the airport? 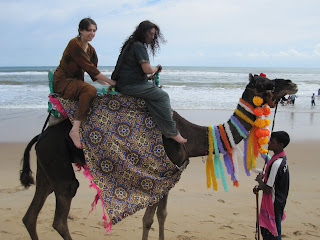 We are in Puri. Every night it is raining. It was pouring down like
anything yesterday. We were on a motor rickshaw when it started. I was sitting in the front along wit the driver and got completely soaked. The rickshaw has no side walls. It is all open. Some old plastic sheet hangs on the side which I had to hold down as a window to protect myself from the rain somewhat. People just walk in the rain or have a small hanky on their head, some have an umbrella. They lived with the rain their whole live. It is not a problem for them. Getting out of the rickshaw one steps into a little stream running down more or less every street and narrow lane. The other devotees were more lucky as they sat in the back of the rickshaw. There is always something to learn.

Our flight from Calcutta to Bhubaneswar was also adventurous. We flew with Kingfisher airlines. It was a very small airport and the plane was a propeller machine. It sounded like the WW2 blitz on London. Anyway, we made it. No, there were no goats on the plane. The service was actually very good. The fell over you to serve you. While sitting at the Kolkata airport the Kingfisher staff approached us several times and asked our destination and while approaching the check in counter at least three staff members jumped on us to help us with our suitcases. I have never seen this with any other airline. It was a very small plane and the Bhubaneswar airport was even smaller. Anyway, we got there.

Of course we had some trouble with our accommodation but we were
sorted eventually. We are staying in the Birla guesthouse, which is
directly on the beach of the Indian ocean. Therefore we always get a
fresh wind throughout our room. It is a two minutes walk to the beach.

This morning we went to the beach to take our bath. Nandini Radha and Varshana Kishori tried their luck with a Camel ride just in case we miss the taxi to the airport. It is not as easy as one would think and they were down quicker than they went up. I have wisely skipped this kind of exercise.

In the meantime Samir got a full one hour body massage for 100 Rupees, which is just over a Pound. The matajis took to an acupressure treatment for the same price. There are so many people offering any sort of treatments one can only think of. The pearl sellers are after us all the time. They have genuine perls from the ocean for a price one can only dream of in the West.

Samir and Varshana Kishori mataji went into the Jagannatha temple yesterday for darshan. Varshana has her own story to tell. Westerners are not allowed into the temple. I heard a story of an American tourist entering the temple unnoticed. They put him into prison for a month, cleaned the whole temple and threw all the offerings of the day away, - and the temple is huge.

Srila Prabhupada explains that a son of a doctor is certainly not qualified as a doctor just because his father is a doctor. No, he has to go to university and qualify. Then he is accepted as a medical
practitioner, not otherwise. Therefore we understand it is according to training and qualification. However, the cast system has degenerated in time and one became cathegorized according to birth only, but this is not what Krishna says.