A visit to Tota Gopinatha temple 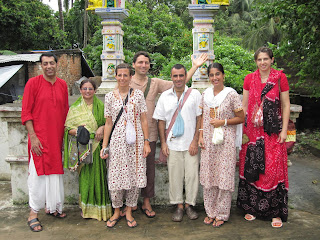 When we woke up this morning it was raining again. This is quite unusual for this time of the year. The rain eventually died down later in the morning, which enabled us to visit some important temples and locations in Puri.

Our first visit was to the Tota Gopinatha temple. This is the place where Lord Caitanya is said to have entered into the deity of Tota Gopinatha. We were told that when one visits this temple at 5 AM the pujari will show one the crack in the foot of the deity where Lord Caitanya is said to have entered the deity. There are other accounts too that say the Lord walked into the sea when winding up His pastimes in this world. At this temple we met a group of devotees from Argentina, who are on their way to Sri Dham Mayapur. Just outside the temple we took the group photo above.

How nice Samir looks in his new dhoti and with tilaka marks on his forehead. It is the first time he wears dhoti and tilaka. He promised to carry on dressing as a Vaishnava once he is back in the UK. Now he not only looks like a proper Vaishnava on the inside but as one on the outside as well.

Next we visited the samadhi of Haridas Thakura, which is the place where Haridas Thakura's body is buried. It was his wish that he would leave this mortal frame with his eyes fixed on the beautiful face of Lord Caitanya. Lord Caitanya granted him this wish and while looking at the Lord Haridas departed from this world. Thereafter Lord Caitanya took his body into his arms and danced. Then he washed his body and buried him near the sea. The Lord ordered His devotees to arrange for a grand feast, which the Lord personally distributed amongst the thousands of Vaishnavas present.

We also visited Siddha Bakula, which is the tree under which Haridas Thakura performed his yajna of chanting 3 lakhs of chanting the Hare Krishna mantra, which is 300,000 names and which must have taken him 23 hours leaving just one hour for eating and sleeping. This is why Lord Caitanya proclaimed Haridas Thakura as the Nama Acharya, the greatest teacher of the Holy Name. Haridas Thakura was the personification of Lord Caitanya's siksastakam prayers, namely to chant the Hare Krishna mantra in the mood of great humility, more humble than the straw in the street and more tolerant than a tree.

The straw in the street is not protesting when people walk over it and the tree tolerates all kind of weather conditions without complaining. This should be our mood when chanting Hare Krishna. Moreover, we should offer respect to everyone and not expect any respect for ourselves. In this mood we can chant Hare Krishna 24 hours a day.

Lord Caitanya regularly visited Haridas at Siddha Bakula after He had taken darshan of Lord Jagannatha. Many intimate discussion took place at this location. In the courtyard of the temple is a bakula tree. The tree was not always there and Haridas chanted his rounds in the hot sun. One day Lord Caitanya could not any longer bear such great austerities of His beloved devotee. He brought a toothpick from Lord Jagannatha and planted it in the ground where Haridas was sitting. In no time a beautiful bakula tree grew there and gave Haridas some protection from the hot midday sun.

Haridas grew up in a Muslim family and was therefore an outcast in the strict cast oriented society of Lord Caitanya's time, some 500 years ago. However, the Lord broke down all boundaries of cast. He distributed the Holy Name to everyone and all without any distinction. The cast system was so severe that when the shadow of a lower born sudra fell on a brahmana he would severely chastise the offender and would have to take a bath immediately, fearing that he was now contaminated.

When Lord Caitanya spread His sankirtana movement he embraced all, sudras and outcasts alike. Love of Godhead has no boundaries. In fact the Lord started a great social revolution, which eventually took places like Navadwipa in a great storm, culminating in a torchlight march of tens of thousands of Vaishnavas to the residence of the Kazi, on who's order a mridanga drum had been broken in his attempt to stop the sankirtana movement. Eventually the Kazi attended a discussion with the Lord and submitted to Him. To this very day a declaration of the Kazi and all his followers and dynasty is still honoured, namely that this sankirtana movement of Lord Caitanya will never be disturbed in any way. Harinam sankirtana ki jaya!

It may also be noted that Haridas Thakura was never allowed to enter the temple of Lord Jagannatha. The same counted for Rupa and Sanatana, because they were employed in the Muslim government of the day. We therefore feel we are in good company because we as Westerners are also barred to enter the Jagannatha temple.

The Gambira was our next goal. It is the place where Lord Caitanya spent much of his later years in Puri. One can see the small room where the Lord was sitting discussing Lord Krishna's pastimes with His most intimate devotees. Near the entrance of the temple one can see a most beautiful statue of the Lord with His golden complexion. We have taken a photo to show in a slide show on our return.

There is also a small ISKCON temple in Puri, which we visited too. It is at the location where the bhajana kutir of Bhaktivinode Thakura was. Bhaktivinode is one of the great Vaishnava acharyas in our sampradaya who wrote many books and songs, which we still sing today.

We concluded today's parikrama to the holy sites of Puri by taking a most delicious lunch prasadam in the Grand Restaurant, which is famous for its clean and good food. While I am sitting in a small Internet Cafe typing this short report of our pilgrimage the matajis have gone for a shopping trip near he sea front. There are so many things on offer and one can easily be carried away. I better finish here because the rain will surely come again this evening. I hope all of you who read this blog are well and happy. May Lord Jagannatha's mercy be upon you all.